Sense ​and Sensibility by Jane Austen

Spirited and impulsive, Marianne Dashwood is the complete opposite to her controlled and sensible sister, Elinor. 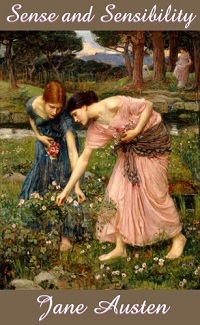 When it comes to matters of the heart, Marianne is passionate and romantic and soon falls for the charming, but unreliable Mr Willoughby. Elinor, in contrast, copes stoically with the news that her love, Edward Ferrars is promised to another. It is through their shared experiences of love that both sisters come to learn that the key to a successful match comes from finding the perfect mixture of rationality and feeling.

“I come now to the relation of a misfortune, which about this time befell Mrs. John Dashwood. It so happened that while her two sisters with Mrs. Jennings were first calling on her in Harley Street, another of her acquaintance had dropt in – a circumstance in itself not apparently likely to produce evil to her. But while the imaginations of other people will carry them away to form wrong judgments of our conduct, and to decide on it by slight appearances, one’s happiness must in some measure be always at the mercy of chance. In the present instance, this last-arrived lady allowed her fancy to so far outrun truth and probability, that on merely hearing the name of the Miss Dashwoods, and understanding them to be Mr. Dashwood’s sisters, she immediately concluded them to be staying in Harley Street; and this misconstruction produced within a day or two afterwards, cards of invitation for them as well as for their brother and sister, to a small musical party at her house. The consequence of which was, that Mrs. John Dashwood was obliged to submit not only to the exceedingly great inconvenience of sending her carriage for the Miss Dashwoods, but, what was still worse, must be subject to all the unpleasantness of appearing to treat them with attention: and who could tell that they might not expect to go out with her a second time? The power of disappointing them, it was true, must always be hers. But that was not enough; for when people are determined on a mode of conduct which they know to be wrong, they feel injured by the expectation of any thing better from them.”