H.G. Wells’ great novel of the dangers of science describes a man cast out from society by his own terrifying discovery.

THE INVISIBLE MAN tells the story of Griffin, a brilliant and obsessed scientist dedicated to achieving invisibility. Taking whatever action is necessary to keep his incredible discovery safe, he terrorises the local village where he has sought refuge. Wells skilfully weaves the themes of science, terror and pride as the invisible Griffin gradually loses his sanity and, ultimately, his humanity. 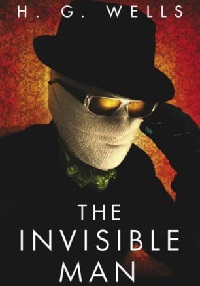 “A frantic desire to free himself took possession of Kemp. The hand of the bandaged arm gripped his shoulder, and he was suddenly tripped and flung backwards upon the bed. He opened his mouth to shout, and the corner of the sheet was thrust between his teeth. The Invisible Man had him down grimly, but his arms were free and he struck and tried to kick savagely.

“Listen to reason, will you?” said the Invisible Man, sticking to him in spite of a pounding in the ribs. “By Heaven! you’ll madden me in a minute!

Kemp struggled for another moment and then lay still.

“If you shout, I’ll smash your face,” said the Invisible Man, relieving his mouth.

“I’m an Invisible Man. It’s no foolishness, and no magic. I really am an Invisible Man. And I want your help. I don’t want to hurt you, but if you behave like a frantic rustic, I must. Don’t you remember me, Kemp? Griffin, of University College?”

He sat up and felt his neck.

“I am Griffin, of University College, and I have made myself invisible. I am just an ordinary man—a man you have known—made invisible.”

“Griffin,” answered the Voice. A younger student than you were, almost an albino, six feet high, and broad, with a pink and white face and red eyes, who won the medal for chemistry.”