The ​Woman in White by Wilkie Collins

There, ​in the middle of the broad, bright high-road—there, as if it had that moment sprung out of the earth or dropped from the heaven—stood the figure of a solitary Woman, dressed from head to foot in white garments.” 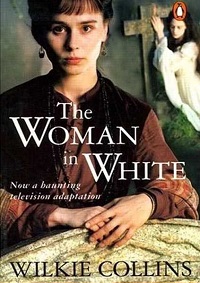 Thus young Walter Hartright first meets the mysterious woman in white in what soon became one of the most popular novels of the nineteenth century. Secrets, mistaken identities, surprise revelations, amnesia, locked rooms and locked asylums, and an unorthodox villain made this mystery thriller an instant success when it first appeared in 1860, and it has continued to enthrall readers ever since. From the hero’s foreboding before his arrival at Limmeridge House to the nefarious plot concerning the beautiful Laura, the breathtaking tension of Collins’s narrative created a new literary genre of suspense fiction.

“I looked attentively at her, as she put that singular question to me. It was then nearly one o’clock. All I could discern distinctly by the moonlight was a colourless, youthful face, meagre and sharp to look at about the cheeks and chin; large, grave, wistfully attentive eyes; nervous, uncertain lips; and light hair of a pale, brownish-yellow hue. There was nothing wild, nothing immodest in her manner: it was quiet and self-controlled, a little melancholy and a little touched by suspicion; not exactly the manner of a lady, and, at the same time, not the manner of a woman in the humblest rank of life. The voice, little as I had yet heard of it, had something curiously still and mechanical in its tones, and the utterance was remarkably rapid. She held a small bag in her hand: and her dress—bonnet, shawl, and gown all of white—was, so far as I could guess, certainly not composed of very delicate or very expensive materials. Her figure was slight, and rather above the average height—her gait and actions free from the slightest approach to extravagance. This was all that I could observe of her in the dim light and under the perplexingly strange circumstances of our meeting. What sort of a woman she was, and how she came to be out alone in the high-road, an hour after midnight, I altogether failed to guess. The one thing of which I felt certain was, that the grossest of mankind could not have misconstrued her motive in speaking, even at that suspiciously late hour and in that suspiciously lonely place.”