The ​Scarlet Plague by Jack London 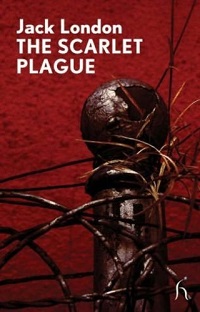 James Howard Smith, one of the few survivalists left alive in the San Francisco area, tries to impart the value of wisdom of a world left behind to his grandsons as his time on Earth grows ever shorter.

“The boy, who led the way, checking the eagerness of his muscles to the slow progress of the elder, likewise wore a single garment—a ragged-edged piece of bear-skin, with a hole in the middle through which he had thrust his head. He could not have been more than twelve years old. Tucked coquettishly over one ear was the freshly severed tail of a pig. In one hand he carried a medium-sized bow and an arrow.

On his back was a quiverful of arrows. From a sheath hanging about his neck on a thong, projected the battered handle of a hunting knife. He was as brown as a berry, and walked softly, with almost a catlike tread. In marked contrast with his sunburned skin were his eyes—blue, deep blue, but keen and sharp as a pair of gimlets. They seemed to bore into aft about him in a way that was habitual. As he went along he smelled things, as well, his distended, quivering nostrils carrying to his brain an endless series of messages from the outside world. Also, his hearing was acute, and had been so trained that it operated automatically. Without conscious effort, he heard all the slight sounds in the apparent quiet—heard, and differentiated, and classified these sounds—whether they were of the wind rustling the leaves, of the humming of bees and gnats, of the distant rumble of the sea that drifted to him only in lulls, or of the gopher, just under his foot, shoving a pouchful of earth into the entrance of his hole.

Suddenly he became alertly tense. Sound, sight, and odor had given him a simultaneous warning. His hand went back to the old man, touching him, and the pair stood still. Ahead, at one side of the top of the embankment, arose a crackling sound, and the boy’s gaze was fixed on the tops of the agitated bushes. Then a large bear, a grizzly, crashed into view, and likewise stopped abruptly, at sight of the humans. He did not like them, and growled querulously. Slowly the boy fitted the arrow to the bow, and slowly he pulled the bowstring taut. But he never removed his eyes from the bear.”