New adventures lie ahead as Anne Shirley packs her bags, waves good-bye to childhood, and heads for Redmond College. 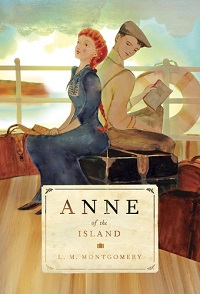 With old friend Prissy Grant waiting in the bustling city of Kingsport and frivolous new pal Philippa Gordon at her side, Anne tucks her memories of rural Avonlea away and discovers life on her own terms, filled with surprises…including a marriage proposal from the worst fellow imaginable, the sale of her very first story, and a tragedy that teaches her a painful lesson. But tears turn to laughter when Anne and her friends move into an old cottage and an ornery black cat steals her heart. Little does Anne know that handsome Gilbert Blythe wants to win her heart, too. Suddenly Anne must decide if she’s ready for love…

“The girls at Patty’s Place were dressing for the reception which the Juniors were giving for the Seniors in February. Anne surveyed herself in the mirror of the blue room with girlish satisfaction. She had a particularly pretty gown on. Originally it had been only a simple little slip of cream silk with a chiffon overdress. But Phil had insisted on taking it home with her in the Christmas holidays and embroidering tiny rosebuds all over the chiffon. Phil’s fingers were deft, and the result was a dress which was the envy of every Redmond girl. Even Allie Boone, whose frocks came from Paris, was wont to look with longing eyes on that rosebud concoction as Anne trailed up the main staircase at Redmond in it.
Anne was trying the effect of a white orchid in her hair. Roy Gardner had sent her white orchids for the reception, and she knew no other Redmond girl would have them that night—when Phil came in with admiring gaze.
“Anne, this is certainly your night for looking handsome. Nine nights out of ten I can easily outshine you. The tenth you blossom out suddenly into something that eclipses me altogether. How do you manage it?”
“It’s the dress, dear. Fine feathers.”
“‘Isn’t. The last evening you flamed out into beauty you wore your old blue flannel shirtwaist that Mrs. Lynde made you. If Roy hadn’t already lost head and heart about you he certainly would tonight. But I don’t like orchids on you, Anne. No; it isn’t jealousy.

Orchids don’t seem to BELONG to you. They’re too exotic—too tropical—too insolent. Don’t put them in your hair, anyway.”