This ​is the way the world ends: A nuclear strike on a deep sea vent. 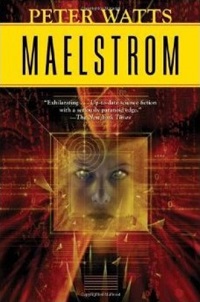 The target was an ancient microbe – voracious enough to drive the whole biosphere to extinction – and a handful of amphibious humans called rifters who’d inadvertently released it from three billion years of solitary confinement.

The resulting tsunami killed millions. It’s not as though there was a choice: saving the world excuses almost any degree of collateral damage.

Unless, of course, you miss the target.

Now North America’s west coast lies in ruins. Millions of refugees rally around a mythical figure mysteriously risen from the deep sea. A world already wobbling towards collapse barely notices the spread of one more blight along its shores. And buried in the seething fast-forward jungle that use to be called Internet, something vast and inhuman reaches out to a woman with empty white eyes and machinery in her chest. A woman driven by rage, and incubating Armageddon.

Her name is Lenie Clarke. She’s a rifter. She’s not nearly as dead as everyone thinks.