Anne Shirley is grown up, has married her beloved Gilbert and now is the mother of six mischievous children. 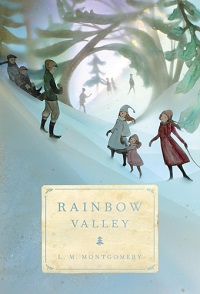 These boys and girls discover a special place all their own, but they never dream of what will happen when the strangest family moves into an old nearby mansion.

The Meredith clan is two boys and two girls, with a minister father but no mother-and a runaway girl named Mary Vance.

Soon the Meredith kids join Anne’s children in their private hideout to carry out their plans to save Mary from the orphanage,to help the lonely minister find happiness, and to keep a pet rooster from the soup pot.

There’s always an adventure brewing in the sun-dappled world of Rainbow Valley.

“Anne was sitting on the steps, her hands clasped over her knee, looking, in the kind dusk, as girlish as a mother of many has any right to be; and the beautiful gray-green eyes, gazing down the harbour road, were as full of unquenchable sparkle and dream as ever. Behind her, in the hammock, Rilla Blythe was curled up, a fat, roly-poly little creature of six years, the youngest of the Ingleside children. She had curly red hair and hazel eyes that were now buttoned up after the funny, wrinkled fashion in which Rilla always went to sleep.”