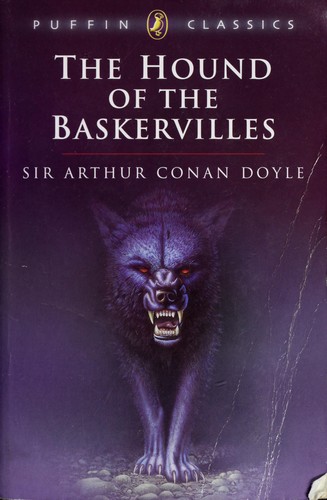 Generations ago, a hound of hell tore out the throat of devilish Hugo Baskerville on the moonlit moor. Poor, accursed Baskerville Hall now has another mysterious death: that of Sir Charles Baskerville. Could the culprit somehow be mixed up with secretive servant Barrymore, history-obsessed Dr. Frankland, butterfly-chasing Stapleton, or Selden, the Notting Hill murderer at large? Someone’s been signaling with candles from the mansion’s windows. Nor can supernatural forces be ruled out. Can Dr. Watson–left alone by Sherlock Holmes to sleuth in fear for much of the novel–save the next Baskerville, Sir Henry, from the hound’s fangs?

“Mr. Sherlock Holmes, who was usually very late in the mornings, save upon those not infrequent occasions when he was up all night, was seated at the breakfast table. I stood upon the hearth-rug and picked up the stick which our visitor had left behind him the night before. It was a fine, thick piece of wood, bulbous-headed, of the sort which is known as a “Penang lawyer.” Just under the head was a broad silver band nearly an inch across. “To James Mortimer, M.R.C.S., from his friends of the C.C.H.,” was engraved upon it, with the date “1884.” It was just such a stick as the old-fashioned family practitioner used to carry—dignified, solid, and reassuring.
“Well, Watson, what do you make of it?”
Holmes was sitting with his back to me, and I had given him no sign of my occupation.
“How did you know what I was doing? I believe you have eyes in the back of your head.”
“I have, at least, a well-polished, silver-plated coffee-pot in front of me,” said he. “But, tell me, Watson, what do you make of our visitor’s stick? Since we have been so unfortunate as to miss him and have no notion of his errand, this accidental souvenir becomes of importance. Let me hear you reconstruct the man by an examination of it.”
“I think,” said I, following as far as I could the methods of my companion, “that Dr. Mortimer is a successful, elderly medical man, well-esteemed since those who know him give him this mark of their appreciation.”
“Good!” said Holmes. “Excellent!”
“I think also that the probability is in favour of his being a country practitioner who does a great deal of his visiting on foot.”
“Why so?”
“Because this stick, though originally a very handsome one has been so knocked about that I can hardly imagine a town practitioner carrying it. The thick-iron ferrule is worn down, so it is evident that he has done a great amount of walking with it.”

THE HOUND OF THE BASKERVILLES – SHERLOCK HOLMES #3 EBOOK DOWNLOAD