While walking in the Swiss Alps, two English travellers fall into a space-warp, and suddenly find themselves in another world. 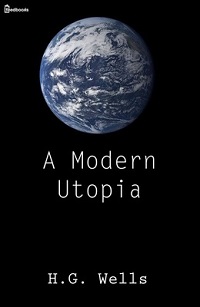 In many ways the same as our own – even down to the characters that inhabit it – this new planet is still somehow radically different, for the two walkers are now upon a Utopian Earth controlled by a single World Government. Here, as they soon learn, all share a common language, there is sexual, economic and racial equality, and society is ruled by socialist ideals enforced by an austere, voluntary elite: the Samurai’. But what will the Utopians make of these new visitors from a less perfect world?

“No less than a planet will serve the purpose of a modern Utopia. Time was when a mountain valley or an island seemed to promise sufficient isolation for a polity to maintain itself intact from outward force; the Republic of Plato stood armed ready for defensive war, and the New Atlantis and the Utopia of More in theory, like China and Japan through many centuries of effectual practice, held themselves isolated from intruders. Such late instances as Butler’s satirical “Erewhon,” and Mr. Stead’s queendom of inverted sexual conditions in Central Africa, found the Tibetan method of slaughtering the inquiring visitor a simple, sufficient rule. But the whole trend of modern thought is against the permanence of any such enclosures. We are acutely aware nowadays that, however subtly contrived a State may be, outside your boundary lines the epidemic, the breeding barbarian or the economic power, will gather its strength to overcome you. The swift march of invention is all for the invader. Now, perhaps you might still guard a rocky coast or a narrow pass; but what of that near to-morrow when the flying machine soars overhead, free to descend at this point or that? A state powerful enough to keep isolated under modern conditions would be powerful enough to rule the world, would be, indeed, if not actively ruling, yet passively acquiescent in all other human organisations, and so responsible for them altogether. World-state, therefore, it must be.”