A Study in Scarlet by Arthur Conan Doyle (Sherlock Holmes #1) 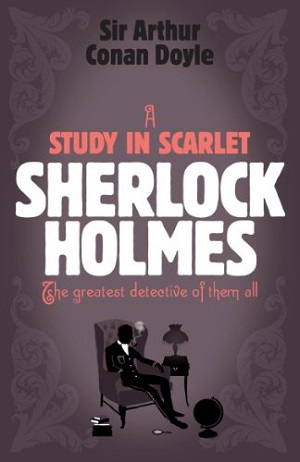 When Dr John Watson takes rooms in Baker Street with amateur detective Sherlock Holmes, he has no idea that he is about to enter a shadowy world of criminality and violence. Accompanying Holmes to an ill-omened house in south London, Watson is startled to find a dead man whose face is contorted in a rictus of horror. There is no mark of violence on the body yet a single word is written on the wall in blood. Dr Watson is as baffled as the police, but Holmes’s brilliant analytical skills soon uncover a trail of murder, revenge and lost love…

In the year 1878 I took my degree of Doctor of Medicine of the University of London, and proceeded to Netley to go through the course prescribed for surgeons in the army. Having completed my studies there, I was duly attached to the Fifth Northumberland Fusiliers as Assistant Surgeon. The regiment was stationed in India at the time, and before I could join it, the second Afghan war had broken out. On landing at Bombay, I learned that my corps had advanced through the passes, and was already deep in the enemy’s country. I followed, however, with many other officers who were in the same situation as myself, and succeeded in reaching Candahar in safety, where I found my regiment, and at once entered upon my new duties.
The campaign brought honours and promotion to many, but for me it had nothing but misfortune and disaster. I was removed from my brigade and attached to the Berkshires, with whom I served at the fatal battle of Maiwand. There I was struck on the shoulder by a Jezail bullet, which shattered the bone and grazed the subclavian artery. I should have fallen into the hands of the murderous Ghazis had it not been for the devotion and courage shown by Murray, my orderly, who threw me across a pack-horse, and succeeded in bringing me safely to the British lines.”