The sixth book in the Anne Shirley series. 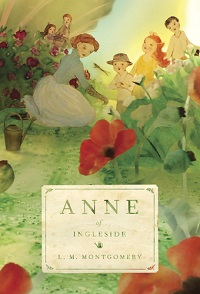 Anne is now the mother of five children – with a sixth baby on the way. But even with endless demands on her time, she couldn’t be happier and there’s nowhere in the world she’d rather be.

No matter what life brings – whether it’s the numerous scrapes her children get up to or Gilbert’s insufferable aunt outstaying her welcome by months – Anne faces every challenge with her usual verve for life. But then she begins to suspect that Gilbert doesn’t love her any more. She’s a little older, it’s true, but Anne is the same spirited redhead she’s always been. She hasn’t changed. But has he?

“Anne ended a week that had been full of pleasant days by taking flowers to Matthew’s grave the next morning and in the afternoon she took the train from Carmody home. For a time she thought of all the old loved things behind her and then her thoughts ran ahead of her to the loved things before her. Her heart sang all the way because she was going home to a joyous house … a house where every one who crossed its threshold knew it was a home … a house that was filled all the time with laughter and silver mugs and snapshots and babies … precious things with curls and chubby knees … and rooms that would welcome her … where the chairs waited patiently and the dresses in her closet were expecting her … where little anniversaries were always being celebrated and little secrets were always being whispered.

“It’s lovely to feel you like going home,” thought Anne, fishing out of her purse a certain letter from a small son over which she had laughed gaily the night before, reading it proudly to the Green Gables folks … the first letter she had ever received from any of her children.

It was quite a nice little letter for a seven-year-old who had been going to school only a year to write, even though Jem’s spelling was a bit uncertain and there was a big blob of ink in one corner.”