Riders of the Purple Sage by Zane Grey

It is the story of Lassiter, a gunslinging avenger in black, who shows up in a remote Utah town just in time to save the young and beautiful rancher Jane Withersteen from having to marry a Mormon elder against her will.

“The home of Jane Withersteen stood in a circle of cottonwoods, and was a flat, long, red-stone structure with a covered court in the center through which flowed a lively stream of amber-colored water. In the massive blocks of stone and heavy timbers and solid doors and shutters showed the hand of a man who had builded against pillage and time; and in the flowers and mosses lining the stone-bedded stream, in the bright colors of rugs and blankets on the court floor, and the cozy corner with hammock and books and the clean-linened table, showed the grace of a daughter who lived for happiness and the day at hand. 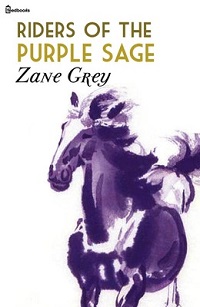 Jane turned Lassiter’s horse loose in the thick grass. “You will want him to be near you,” she said, “or I’d have him taken to the alfalfa fields.” At her call appeared women who began at once to bustle about, hurrying to and fro, setting the table. Then Jane, excusing herself, went within.

She passed through a huge low ceiled chamber, like the inside of a fort, and into a smaller one where a bright wood-fire blazed in an old open fireplace, and from this into her own room. It had the same comfort as was manifested in the home-like outer court; moreover, it was warm and rich in soft hues.

Seldom did Jane Withersteen enter her room without looking into her mirror. She knew she loved the reflection of that beauty which since early childhood she had never been allowed to forget. Her relatives and friends, and later a horde of Mormon and Gentile suitors, had fanned the flame of natural vanity in her. So that at twenty-eight she scarcely thought at all of her wonderful influence for good in the little community where her father had left her practically its beneficent landlord, but cared most for the dream and the assurance and the allurement of her beauty. This time, however, she gazed into her glass with more than the usual happy motive, without the usual slight conscious smile. For she was thinking of more than the desire to be fair in her own eyes, in those of her friend; she wondered if she were to seem fair in the eyes of this Lassiter, this man whose name had crossed the long, wild brakes of stone and plains of sage, this gentle-voiced, sad-faced man who was a hater and a killer of Mormons. It was not now her usual half-conscious vain obsession that actuated her as she hurriedly changed her riding-dress to one of white, and then looked long at the stately form with its gracious contours, at the fair face with its strong chin and full firm lips, at the dark-blue, proud, and passionate eyes.”