A huge international corporation has developed a facility along the Juan de Fuca Ridge at the bottom of the Pacific Ocean to exploit geothermal power. 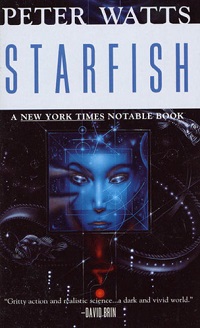 They send a bio-engineered crew–people who have been altered to withstand the pressure and breathe the seawater–down to live and work in this weird, fertile undersea darkness.
Unfortunately the only people suitable for long-term employment in these experimental power stations are crazy, some of them in unpleasant ways. How many of them can survive, or will be allowed to survive, while worldwide disaster approaches from below?

“Mr. Codpiece comes up behind him, lays a familiar hand on his shoulder. Joel resists the urge to shrug it off. That’s another problem with these tour subs; no real cockpit, just a set of controlsat the front end of the passenger lounge. You can’t shut yourself away from the cargo.
“Quite a layout,” Mr. Codpiece says.
Joel reminds himself of his professional duties, and smiles.
“Been doing this run for long?” The whitecap’s skin glows with a golden tan of cultured xanthophylls. Joel’s smile grows a little more brittle. He’s heard all about the benefits, of course; UV protection, higher blood oxygen, more energy — they say it even cuts down on your food requirements, not that any of these people have to worry about grocery money. Still, it’s too bloody freakish for Joel’s tastes. Implants should be made out of meat, or at least plastic. If people were meant to photosynthesize they’d have leaves.
“I said—”
Joel nods. “Couple of years.”
A grunt. “Didn’t know Seabed Safaris was around that long.”
“I don’t work for Seabed Safaris,” Joel says, as politely as possible. “I freelance.” The whitecap probably doesn’t know any better, comes from a generation when everyone pledged allegiance to the same master year after year. Nobody thought it was such a bad thing back then.
“Good for you.” Mr. Codpiece gives him a fatherly pat on the shoulder.”