The Call of the Wild by Jack London (Audiobook)

In ​this quintessential adventure story, Jack London takes readers on an arduous journey through the forbidding Alaskan landscape during the gold rush of the 1890’s. 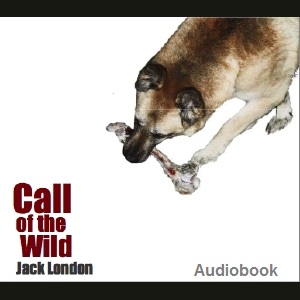 Buck, a rangy mixed breed used to a comfortable, sun-filled life as a family dog, is stolen by a greedy opportunist and sold to dog traffickers. In no time, Buck finds himself on a team of sled dogs run ragged in the harsh winter of the Klondike. In a climate where every day is a savage struggle for survival.

“Buck did not read the newspapers, or he would have known that trouble was brewing, not alone for himself, but for every tide- water dog, strong of muscle and with warm, long hair, from Puget Sound to San Diego. Because men, groping in the Arctic darkness, had found a yellow metal, and because steamship and transportation companies were booming the find, thousands of men were rushing into the Northland. These men wanted dogs, and the dogs they wanted were heavy dogs, with strong muscles by which to toil, and furry coats to protect them from the frost.
Buck lived at a big house in the sun-kissed Santa Clara Valley. Judge Miller’s place, it was called. It stood back from the road, half hidden among the trees, through which glimpses could be caught of the wide cool veranda that ran around its four sides. The house was approached by gravelled driveways which wound about through wide-spreading lawns and under the interlacing boughs of tall poplars. At the rear things were on even a more spacious scale than at the front.”