The last twelve stories written about Holmes and Watson, these tales reflect the disillusioned world of the 1920’s in which they were written. 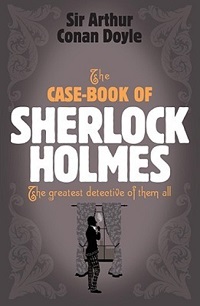 Some of the sharpest turns of wit in English literature are contrasted by dark images of psychological tragedy, suicide, and incest in a collection of tales that have haunted generations of readers.

“It was, therefore, an empty room into which Billy, a minute later, ushered Count Sylvius. The famous game-shot, sportsman, and man-about-town was a big, swarthy fellow, with a formidable dark moustache shading a cruel, thin-lipped mouth, and surmounted by a long, curved nose like the beak of an eagle. He was well dressed, but his brilliant necktie, shining pin, and glittering rings were flamboyant in their effect. As the door closed behind him he looked round him with fierce, startled eyes, like one who suspects a trap at every turn. Then he gave a violent start as he saw the impassive head and the collar of the dressing-gown which projected above the armchair in the window. At first his expression was one of pure amazement. Then the light of a horrible hope gleamed in his dark, murderous eyes. He took one more glance round to see that there were no witnesses, and then, on tiptoe, his thick stick half raised, he approached the silent figure. He was crouching for his final spring and blow when a cool, sardonic voice greeted him from the open bedroom door:
“Don’t break it, Count! Don’t break it!”
The assassin staggered back, amazement in his convulsed face. For an instant he half raised his loaded cane once more, as if he would turn his violence from the effigy to the original; but there was something in that steady gray eye and mocking smile which caused his hand to sink to his side.”