The Island of Dr. Moreau by H. G. Wells

Edward Prendick is travelling in the South Pacific when his ship goes down. 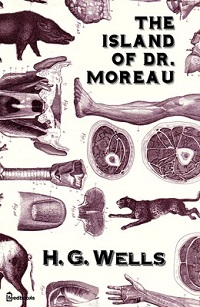 He is saved after many days at sea by another ship, and a passenger, Montgomery, nurses him back to health. Prendick becomes interested in the mystery of Montgomery’s life. Why does he live on an unknown Pacific island? Why is he taking animals there? And should Prendick fear the dark secrets of Montgomery’s master – the even more mysterious Doctor Moreau?

“THE cabin in which I found myself was small and rather untidy. A youngish man with flaxen hair, a bristly straw-coloured moustache, and a dropping nether lip, was sitting and holding my wrist. For a minute we stared at each other without speaking. He had watery grey eyes, oddly void of expression. Then just overhead came a sound like an iron bedstead being knocked about, and the low angry growling of some large animal. At the same time the man spoke. He repeated his question,—”How do you feel now?”
I think I said I felt all right. I could not recollect how I had got there. He must have seen the question in my face, for my voice was inaccessible to me.
“You were picked up in a boat, starving. The name on the boat was the ‘Lady Vain,’ and there were spots of blood on the gunwale.”
At the same time my eye caught my hand, so thin that it looked like a dirty skin-purse full of loose bones, and all the business of the boat came back to me.
“Have some of this,” said he, and gave me a dose of some scarlet stuff, iced.
It tasted like blood, and made me feel stronger.
“You were in luck,” said he, “to get picked up by a ship with a medical man aboard.” He spoke with a slobbering articulation, with the ghost of a lisp.
“What ship is this?” I said slowly, hoarse from my long silence.
“It’s a little trader from Arica and Callao. I never asked where she came from in the beginning,—out of the land of born fools, I guess. I’m a passenger myself, from Arica. The silly ass who owns her,—he’s captain too, named Davies,—he’s lost his certificate, or something. You know the kind of man,—calls the thing the ‘Ipecacuanha,’ of all silly, infernal names; though when there’s much of a sea without any wind, she certainly acts according.”