Sherlock Holmes is back on the case in this collection of sparkling short stories. Not only does Sir Arthur Conan Doyle’s brilliant detective investigate a fascinating series of crimes and misdemeanours in The Memoirs, but we also learn about Holmes’ early days as a sleuth hound and encounter the detective’s brilliant brother, Mycroft, who is a member of the Diogenes Club, one of the strangest establishments in London. And, of course, in The Final Problem Holmes come face to face with his nemesis, Professor Moriarty, The Napoleon of Crime. 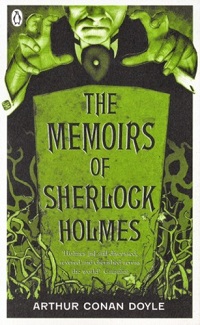 “Hullo! That’s not your pipe on the table. He must have left his behind him. A nice old brier with a good long stem of what the tobacconists call amber. I wonder how many real amber mouthpieces there are in London? Some people think that a fly in it is a sign. Well, he must have been disturbed in his mind to leave a pipe behind him which he evidently values highly.’
‘How do you know that he values it highly?’ I asked.
‘Well, I should put the original cost of the pipe at seven and sixpence. Now it has, you see, been twice mended, once in the wooden stem and once in the amber. Each of these mends, done, as you observe, with silver bands, must have cost more than the pipe did originally. The man must value the pipe highly when he prefers to patch it up rather than buy a new one with the same money.’
‘Anything else?’ I asked, for Holmes was turning the pipe about in his hand, and staring at it in his peculiar pensive way.
He held it up and tapped on it with his long, thin fore-finger, as a professor might who was lecturing on a bone.
‘Pipes are occasionally of extraordinary interest,’ said he. ‘Nothing has more individuality, save perhaps watches and bootlaces. The indications here, however, are neither very marked nor very important. The owner is obviously a muscular man, left-handed, with an excellent set of teeth, careless in his habits, and with no need to practise economy.’
My friend threw out the information in a very offhand way, but I saw that he cocked his eye at me to see if I had followed his reasoning.
‘You think a man must be well-to-do if he smokes a seven-shilling pipe,’ said I.
‘This is Grosvenor mixture at eightpence an ounce,’ Holmes answered, knocking a little out on his palm. ‘As he might get an excellent smoke for half the price, he has no need to practise economy.’
‘And the other points?’
‘He has been in the habit of lighting his pipe at lamps and gas-jets. You can see that it is quite charred all down one side. Of course a match could not have done that. Why should a man hold a match to the side of his pipe? But you cannot light it at a lamp without getting the bowl charred. And it is all on the right side of the pipe. From that I gather that he is a left-handed man. You hold your own pipe to the lamp, and see how naturally you, being right-handed, hold the left side to the flame. You might do it once the other way, but not as a constancy.

This has always been held so. Then he has bitten through his amber. It takes a muscular, energetic fellow, and one with a good set of teeth, to do that. But if I am not mistaken I hear him upon the stair, so we shall have something more interesting than his pipe to study.”