The War of the Worlds by H.G. Wells 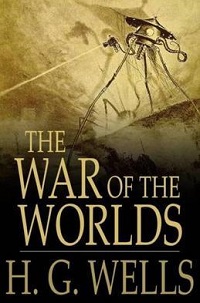 It describes the experiences of an unnamed narrator who travels through the suburbs of London as the Earth is invaded by Martians. It is one of the earliest stories that details a conflict between mankind and an alien race.

“At the sight of the sea, Mrs. Elphinstone, in spite of the assurances of her sister-in-law, gave way to panic. She had never been out of England before, she would rather die than trust herself friendless in a foreign country, and so forth. She seemed, poor woman, to imagine that the French and the Martians might prove very similar. She had been growing increasingly hysterical, fearful, and depressed during the two days’ journeyings. Her great idea was to return to Stanmore. Things had been always well and safe at Stanmore. They would find George at Stanmore.

It was with the greatest difficulty they could get her down to the beach, where presently my brother succeeded in attracting the attention of some men on a paddle steamer from the Thames. They sent a boat and drove a bargain for thirty-six pounds for the three. The steamer was going, these men said, to Ostend.

It was about two o’clock when my brother, having paid their fares at the gangway, found himself safely aboard the steamboat with his charges. There was food aboard, albeit at exorbitant prices, and the three of them contrived to eat a meal on one of the seats forward.

There were already a couple of score of passengers aboard, some of whom had expended their last money in securing a passage, but the captain lay off the Blackwater until five in the afternoon, picking up passengers until the seated decks were even dangerously crowded. He would probably have remained longer had it not been for the sound of guns that began about that hour in the south. As if in answer, the ironclad seaward fired a small gun and hoisted a string of flags. A jet of smoke sprang out of her funnels.”